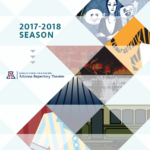 “We start with TIGERS BE STILL, a sweet comedy about two families who find that happiness is not as impossible as it seems,” said Artistic Director and Associate Professor, Brent Gibbs. “Then, just in time for Halloween, we will meet THE ADDAM’S FAMILY in all their ghoulish glory. Next, we present Tennessee Williams’ American classic, A STREETCAR NAMED DESIRE. We are very proud to follow that up with John Patrick Shanley’s Pulitzer Prize-winning play, DOUBT. Next is Shakespeare’s timeless classic, THE MERCHANT OF VENICE and we close out our season with the beloved musical, THE PAJAMA GAME. We hope you will join us for this exciting season and come out to see the stars of tomorrow…”

Tigers Be Still by Kim Rosenstock

Based on Characters Created by Charles Addams

The Merchant of Venice by William Shakespeare

Based on the novel “7 ½ Cents” by Richard Bissell