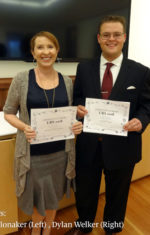 Tucson, AZ – The University of Arizona School of Theatre, Film & Television was happy to host the 6th Annual Undergraduate Research Symposium on April 12 and 13, 2018.  This annual event allowed our Bachelor of Arts students to present original research in a panel format and invited two scholars from outside The University of Arizona to share their own work and methods with the UA community in two keynote speeches.

The two keynote speeches were delivered on the evening of Thursday, April 12 by Prof. Peter Zazzali and Prof. Emily Carman. Prof. Zazzali from the University of Kansas presented work on the history of actor training programs in the US, and the growing importance of fostering entrepreneurship in actor training. Prof. Carman from Chapman University presented her work about 1930s female stars who were in charge of their own careers and paved the way for career autonomy in Hollywood, which included Carole Lombard and Barbara Stanwyck.

The two visiting scholars also served as judges for the student presentations that took place on Friday, April 13. They provided feedback and questions to each student after their panels and selected the winner for both of the $500 prizes for Best Paper in Theatre and Best Paper in Film & Television. The winners of this year’s symposium were Dylan Welker in Theatre, and Susan Slonaker in Film & Television.

Welker’s research, “Cato: America’s Founding Tragedy”, about a forgotten English play called Cato, written by Joseph Addison and first performed in 1713, which was a likely literary inspiration for the American Revolution. Reflecting upon this experience, Welker says “The Undergraduate Research Symposium will forever be a highlight of my undergraduate career. My fellow panelists taught me so much, and I was deeply inspired by their ideas and the quality of work they produced. I feel honored and humbled to be selected as the winner.”

Speaking on the event, Anna Cooper, an Assistant Professor of Film and Television Studies, and one of the organizers of the event stated “The URS is a favorite event of mine every year. It’s not often that we, as educators, get the chance to celebrate the written work of our outstanding students outside of the gradebook. Watching the students perfect their essays and turn them into these polished presentations is really rewarding. I couldn’t be prouder of them.”