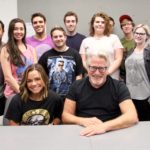 Sitcom Pilot Set at the UA Gets a Staged Reading

Tucson, Arizona – UA Alum Brian Levant, who has worked on over 400 television episodes as writer, director and showrunner, will present a staged reading of a television pilot his students developed in the 7-week course Sitcom Bootcamp at the School of Theatre, Film & Television. The original half-hour pilot episode will be read for the public by actors cast from the UA and the Tucson community on Wednesday, October 10, 2018 from 8-9pm in the UA Center for Creative Photography located at 1030 N. Olive Road.  The event is free and open to the public.

Levant’s television credits include Happy Days, Mork and Mindy and Married with Children, and he is best known for directing the box-office hits Beethoven, The Flintstones, Jingle All the Way, and Are We There Yet? In the early 1970s, Levant took a film class at the UA and later set out to L.A. with a spec script to shop around. At 22, he managed to get in on Garry Marshall’s backyard Saturday morning basketball game, which lead to pitching and then selling a story idea for ‘Happy Days.’ Levant writes, “Incredibly, they exercised their option to have me write a first draft. Ten days later, I turned it in. They thought the script was incredibly bad. It was right there that my career should’ve ended.” But Marshall saw talent in his writing and invited Levant to sit in with the writers and observe the episode being developed. The opportunity that Marshall provided him was invaluable to his career and now he’s in the position to give back through teaching. “It’s been very rewarding to try and share some the knowledge I’ve acquired working in television and with filmmakers like Garry Marshall, Chris Columbus and Steven Spielberg with a new generation who share the same dreams I did as a student.”

The 15 students in the Sitcom Bootcamp developed the series called ‘Fallen Rayne’ under Levant’s guidance. The series is about a Rayne, a flamed-out child star who is trying to reboot her life as a UA Freshman. Rayne meets her new roommate, Maria Estrella Verano, an underprivileged young woman with large ambitions, and they affect each other’s lives in unexpected ways. “The entire concept of developing and writing an original half-hour pilot in 38 hours of class time, is wildly ambitious, but our ‘recruits’ have succeeded in creating a very contemporary and funny program. I can’t wait for them to be able to see their words brought to life,” said Levant about the upcoming staged reading.

“We are honored to have Brian among our faculty this semester. He’s providing our students such a unique learning opportunity by modeling his class after the television writer’s room. It’s a once in a lifetime experience for them to be learning from a director of such stature in the entertainment industry. Brian has shown big-hearted generosity to the school through his ongoing mentorship of students,” said School of Theatre, Film & Television Interim Co-director Yuri Makino.

Levant has been a frequent presenter in the School of Theatre, Film & Television over the past 20 years, in particular when his two daughters were students in the program. In addition, Levant has been conducting television writing workshops for the UA and Tucson Community through the Hanson Film Institute.