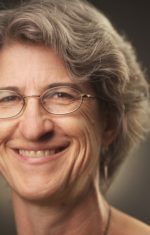 Beverly Seckinger is Professor in the School of Theatre, Film & Television and former Interim Director (2008-2010) and Associate Director (2004-2008) of the School of Media Arts.  She is a founding member of the UA Committee (now Institute) for Lesbian, Gay, Bisexual and Transgender Studies, and since 1993 has directed the annual Lesbian Looks Film Series.

Her film Hippie Family Values, a feature-length documentary about three generations at a back-to-the-land community in rural New Mexico, premiered at the Santa Fe Film Festival in February 2018. The film is distributed to the educational market by New Day Films.

Seckinger’s previous films have been screened on PBS, at international festivals in the US, Europe, Canada, Australia and Latin America, and non-theatrically throughout the U.S.  Her 2004 diary/documentary Laramie Inside Out, about the aftermath of Matthew Shepard’s 1998 murder in her hometown community, had its U.S. broadcast premier on PBS in June 2007, and is distributed by New Day Films, Filmoption/Canada, and American Public Television. It has been screened at dozens of universities, conferences and community events across the country, and purchased for the permanent collections of over 400 colleges and universities.

She is currently working to establish an interdisciplinary Center for Documentary at the University of Arizona, and co-directs the DocScapes screening series, a collaborative project with the Hanson Film Institute.  In 2017 she created DocVisions, a community outreach program that teaches basic documentary skills to UA honors students from diverse majors, who then mentor refugee and immigrant teens in media production.  She also teaches the course Advancing Human Rights through Documentary Media for the UA’s online graduate program in Human Rights Practice.

Seckinger served as head of the Web Operations team (2014-16) and Head of Promotions (2010-12) for New Day Films, the leading filmmaker-owned distribution company for social issue documentaries. She is also a longtime member and former officer and board member of the University Film & Video Association. She spent four years in Morocco, first as a Peace Corps Volunteer English teacher (1981-83), and then as a literacy researcher (1985-86), and served as a USAID-Women in Development consultant in Tunisia (1993, 1994).