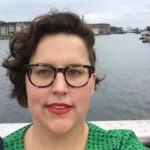 Her forthcoming monograph, titled An American Abroad: European Travel, American Imperialism, and Postwar Hollywood Cinema, looks at 1950s Hollywood films about European travel. It interrogates these films for the rich ways in which they work to validate America’s neo-colonialist presence in postwar Europe.

Dr. Cooper co-edited an anthology, Projecting the World: Representing the “Foreign” in Classical Hollywood, which collects current research on representations of foreign and international space in classical Hollywood cinema (Wayne State UP, 2017).

Her latest project is on cinema and the cultures of neoliberalism; it examines how neoliberal shifts at the local and individual levels are informing cinematic representation, exploring how films function both to reinforce and to resist neoliberal ideologies and governmentalities. The first output from this project, “Spaces of failure: The gendering of neoliberal mobilities in the U.S. indie road movie,” will be published in 2018 as a chapter in the book Journeys on Screen: Theory, Ethics, Aesthetics (edited by Louis Bayman and Natalia Pinazza; forthcoming from Edinburgh UP). She’s also currently editing a special issue of New Review of Film and Television Studies on neoliberalism and cinema, as well as working on an article on neoliberal whiteness in the contemporary fantasy blockbuster.

Another current project uses quantitative methods to assess the presence (or absence) of the voices of women and minorities in contemporary processes of film canons and lists.