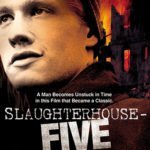 Based on Kurt Vonnegut’s modern classic, SLAUGHTERHOUSE-FIVE is the story of Billy Pilgrim, a World War Two veteran who has come “unstuck” in time. He jumps from the days of his youth, to the strange alien world of Tralfamadore, to the firebombing of Dresden near the end of the war. Winner of the Jury Prize at the Cannes Film Festival, SLAUGHTERHOUSE-FIVE is one of the most fascinating and powerful science fiction films of the 1970s.

Join faculty and students from the School of Theatre, Film & Television as we take a cinematic journey through time…from Ancient Greece to World War II, to the distant future!

Over the course of the year, we will watch science fiction and fantasy classics from the ’60s, ’70s, and ’80s – films about time travel that will thrill you, make you laugh, and make you think. The Widescreen Wednesdays series features not only the screening of a complete feature film, but a lively and informative introduction to each film by a UA professor. Plus, a student from the BFA Film & Television program will present one of his or her short films!