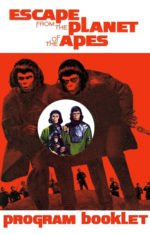 The PLANET OF THE APES franchise has been successfully revived in recent years, so let’s take a trip back to the 1970s and the original hit series! Super-intelligent apes from the future, including Zira (Kim Hunter) and Cornelius (Roddy McDowall) from the first film, travel back in time to 1973 in order to escape the nuclear apocalypse of their own world. The apes become media celebrities, but the U.S. Government is deeply fearful of what they might mean for the future of mankind. The apes have already survived disaster in the future… Will they be able to survive the bigotry of the 20th century?

Join faculty and students from the School of Theatre, Film & Television as we take a cinematic journey through time…from Ancient Greece to World War II, to the distant future!

Over the course of the year, we will watch science fiction and fantasy classics from the ’60s, ’70s, and ’80s – films about time travel that will thrill you, make you laugh, and make you think. The Widescreen Wednesdays series features not only the screening of a complete feature film, but a lively and informative introduction to each film by a UA professor. Plus, a student from the BFA Film & Television program will present one of his or her short films!