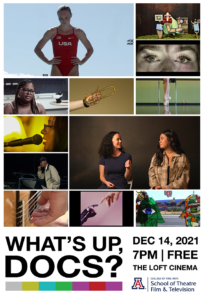 Here are a few samples of what you can expect at the next What’s Up, Docs? showcase.

The screening is FREE to attend and will be followed by a Q&A with the filmmakers. Space is limited.

What’s Up, Docs? is the final event in the inaugural Arizona Signature Series by Arizona Arts, a curation of some of the division’s most engaging fall programs.

Please review The Loft Cinema’s safety protocols before arriving to the event: https://loftcinema.org/about/covid/

The films will also premiere online at our YouTube channel at the same time!