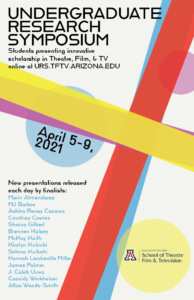 Our annual Undergraduate Research Symposium event showcases outstanding research papers of undergraduate students at the School of Theatre, Film & Television. This year the event has moved online! Over the course of several days starting Monday April 5 at noon, the research paper presentations of thirteen student finalists will be made available to view at urs.tftv.arizona.edu.

Follow us on Instagram, Facebook or Twitter, where we will post when each panel goes live. The symposium will conclude on April 9 with an announcement of generous prizes for student winners from each of the four panels. Mark your calendars and join us as we celebrate the work of our students!

All online presentations will be free to view.