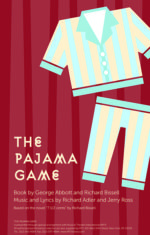 This Tony Award-winning musical tells the story of the Sleep-Tite Pajama Factory, where conditions are anything but tranquil. Sparks fly between the new superintendent, Sid Sorokin, and the leader of the union grievance committee, Babe Williams. Their rocky relationship comes to a head when the workers strike for a 7 ½ cent pay increase, causing a conflict between labor and management, as well as a battle of the sexes. Jealousy, intrigue, knife-throwing and romance combine to impress and entertain audiences of all ages.