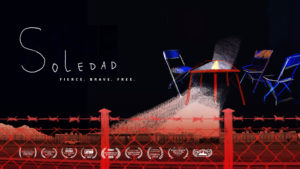 Soledad, the award-winning film from filmmaker and TFTV Adjunct Instructor Lisa Molomot, will stream alongside Nobody Wants Us in honor of Acts of Kindness Week from February 14-17, 2021.

Soledad weaves together live action and animation to tell the story of a woman from Central America who fled gang violence and was then imprisoned in the Eloy Detention Facility when she sought asylum in the United States. Attorney Shefali Milczarek-Desai, who took the case pro bono, mobilized a team of professional colleagues who all worked pro bono to help Soledad gain asylum. The film illustrates the plight faced by many asylum seekers and refugees – and shines a light on the work of lawyers and activists.

Register for free for the screening and discussion at Eventbrite