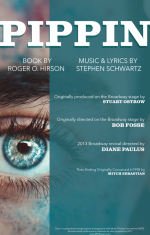 With an infectiously unforgettable score from four-time Grammy winner, three-time Oscar winner and musical theatre giant, Stephen Schwartz, Pippin tells the story of one young man’s journey to be extraordinary. Heir to the Frankish throne, the young prince Pippin is in search of the secret to true happiness and fulfillment. He seeks it in the glories of the battlefield, the temptations of the flesh and the intrigues of political power, but none of them supply him with the treasure he seeks. In the end Pippin finds that happiness lies not in extraordinary endeavors, but rather in the simple, ordinary moments that happen every day.

Today UArizona President Robbins announced a plan for bringing students, faculty and staff back to campus in the Fall. Read more here.

The University of Arizona plans to resume in-person classes in the fall semester, which begins on Aug. 24, President Robert C. Robbins announced Thursday. Robbins made the announcement after having his blood drawn for antibody testing on the first day of a statewide antibody testing effort being led...

UA - setting the standard! Love you, Dr. Robbins! Thank you for everything you are doing for our community!

Today we're spotlighting two TFTV alumni. Galen McCaw just debuted the pilot episode of his new podcast Epilogue Podcast Project, a storytelling project aimed at helping people who have experienced or been affected by issues relating to mental illness, addiction, trauma, and loss - something vitally important to recognize and talk about, especially in the current climate.

The pilot episode features another TFTV alumna Hannah Blair Akins, and tracks her family's journey following the loss of Hannah's sister Brie to suicide. Hannah’s powerful senior thesis film ‘Porchlight' - a quiet drama about the night her family learned of her sister's fate - debuted at last year's ‘I Dream in Widescreen.'

We think it is important to share these kinds of stories to help spread awareness, reduce stigma, and offer assistance. We would also like to remind every student, faculty, or staff member that CAPS is open 24/7. See UAZ Campus Health Service for additional information. ... See MoreSee Less