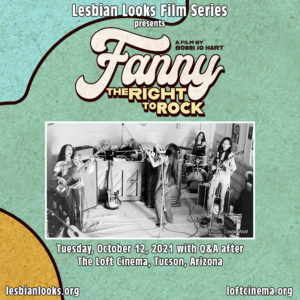 Sometime in the 1960s in Sacramento, two Filipina-American sisters got together with other teenage girls to play music. Little did they know their garage band would evolve into the legendary rock group FANNY, the first all-women band to release an LP with a major record label (Warner/Reprise, 1970). Despite releasing 5 critically acclaimed albums over 5 years, touring with famed bands from SLADE to CHICAGO and amassing a dedicated fan base of music legends including David Bowie, Fanny’s groundbreaking impact in music was written out of history… until bandmates reunite 50 years later with a new rock record deal. With their long, wild hair now streaked with silver, the women of Fanny still know how to rock.

Interspersed with archival performance footage and interviews with rock ’n’ roll legends like Bonnie Raitt, Kate Pierson of The B-52’s, Kathy Valentine of the Go-Go’s, Todd Rundgren, The Runaways’ Cherie Currie, this loving portrait from director Bobbi Jo Hart (Rebels on Pointe, Frameline41) follows the band members as they try to make their mark again after 45 years, while chronicling their trailblazing rise and unfortunate plateau mired by sexism, racism, and homophobia.

This event is FREE, more info at Loft Cinema.