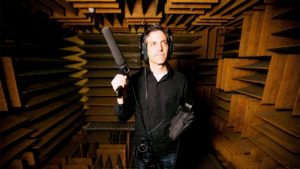 Students are invited to attend a conversation with Academy-Award nominated filmmaker Sam Green on Thursday, Oct. 20, 2022 in Gittings Rm 129B as part of TFTV’s Film & Television Aesthetics course taught by Lisanne Skyler. The talk will focus on Sam’s multifaceted career as documentary filmmaker, his pioneering of the live documentary form and latest work 32 Sounds, a live cinematic collaboration with electronic musician JD Samson, coming to the University of Arizona this weekend, as part of the Arizona Arts Signature Series.

The visit will take place ahead of the special live documentary experience of Green’s film 32 Sounds, presented by Arizona Arts Live, October 21 and 22 in the Marroney Theatre, 8pm.

Sam’s previous “live documentaries” include A Thousand Thoughts (with the Kronos Quartet), The Measure of All Things and The Love Song of R. Buckminster Fuller (featuring the indie rock band Yo La Tengo). His prevue documentary The Weather Underground was nominated for an Academy Award and included in the 2004 Whitney Biennial.

32 Sounds is a poetically woven documentary featuring 32 distinct audio recordings that tantalize the senses and encourage us to contemplate our humanity. The film is guided by live narration from Oscar-nominated Sam Green as an original score is composed on stage by JD Samson (from electronic-feminist-punk band Le Tigre and art/performance collective MEN). Join Arizona Arts Live for a live cinematic experience both immersive and contemplative.

This project is supported in part by the National Endowment for the Arts.