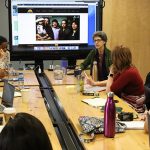 “Documentary filmmaking is more like cooking in the crock pot instead of the microwave,” she explained with a laugh. “It takes time to build relationships, trust and access.”

Beverly gave that apt analogy to a newspaper in Ohio, the Yellow Springs News.

She’s been on the road promoting her documentary film, “Hippie Family Values,” which continues to screen nationally and internationally and is garnering awards. To date the film, a feature-length documentary about three generations at a back-to-the-land community in rural New Mexico, has had 20 screenings around the country.

A Professor in the School of Theatre, Film & Television, Beverly is an accomplished documentary filmmaker and an expert in documentary and social impact. She has several ongoing projects that are all doc-centric.