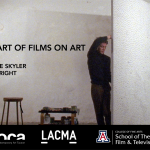 The School of Theatre, Film & Television is proud to present this event as part of the new lecture series for the 2019/2020 season, Day for Night: Conversations on Film & Television.  This exciting new series features renowned TFTV alumni and members of the faculty, who are comprised of internationally recognized filmmakers, producers, and scholars.

In this second installment of the series, Commissioning Editor and Producer of LACMA Productions at the Los Angeles County Museum of Art Erin Wright and writer/director and UA Film & Television professor Lisanne Skyler (HBO’s Brillo Box (3¢ Off )) take you behind the scenes on the making of their acclaimed short film A Few Things About Robert Irwin, sharing innovative approaches to making entertaining, enlightening and emotionally compelling films about art and artists.

Lisanne Skyler is the writer/director of award-winning feature, documentary and short films that have played at such festivals as Sundance, New York Film Festival, South by Southwest, LA Film Festival, AFI Docs, San Francisco International Film Festival and the Venice Film Festival, and broadcast on HBO, Sundance Channel, PBS and around the world. Her HBO Documentary film Brillo Box (3¢ off) was Oscar-shortlisted and an official selection of the New York Film Festival. Across different genres and platforms, tackling subjects ranging from South Central LA pawnshops to the contemporary art market, her films engage audiences with complex social issues, through vivid character portrayals and dynamic visual style.

Erin Wright is Commissioning Editor and Producer of LACMA Productions and Director of Artist Initiatives at the Los Angeles County Museum of Art. She has been producing documentary films about artists and their work for almost a decade, including films on John Baldessari, Mark Bradford, Michael Heizer, Robert Irwin, Barbara Kruger, Catherine Opie, Ed Ruscha, James Turrell, and Peter Zumthor. She has collaborated with and commissioned work from filmmakers such as Lance Accord, Sini Anderson, Pippa Bianco, Dime Davis, Henry Joost and Ariel Schulman, Alysa Nahmias, Doug Pray, Lisanne Skyler, Lucy Walker, and Jessica Yu. Her films have earned official selections at some of the leading international film festivals, including Sundance, South by Southwest, Aspen Shortsfest, DOC NYC, Los Angeles Film Festival, Sheffield Doc/Fest, Full Frame, and AFI DOCS. Wright is currently producing a feature documentary on the artist László Moholy-Nagy that will be released in 2019.

The Art of Films on Art: Producer Erin Wright and Director Lisanne Skyler has a $10 General Admission fee, but is free for MOCA members and TFTV students/guests, this event is open to the public. The lecture will be immediately followed by a reception in MOCA’s Great Hall.

For more information on this event, visit https://tftv.arizona.edu/events/day-for-night-the-art-of-films-on-art-producer-erin-wright-and-director-lisanne-skyler/.

The University of Arizona School of Theatre, Film & Television (TFTV) aims to nurture and develop outstanding artists and scholars by providing rigorous training and mentoring by internationally recognized faculty, excellent internship opportunities, industry-standard resources, and hands-on production experience. TFTV offers comprehensive training programs that aim to prepare students to succeed in a wide range of careers – in the industry, the arts, and higher education. Each year through Arizona Repertory Theatre productions, the Studio Series, and Film & Television screenings, students of TFTV are able to showcase their talents, tell compelling stories, and provide clear results of what happens in their classrooms and studios.  The TFTV Film & Television program was ranked #20 among U.S. film schools by The Wrap’s “Top 50 Film Schools,” making UA one of the top places to study theatre and film.